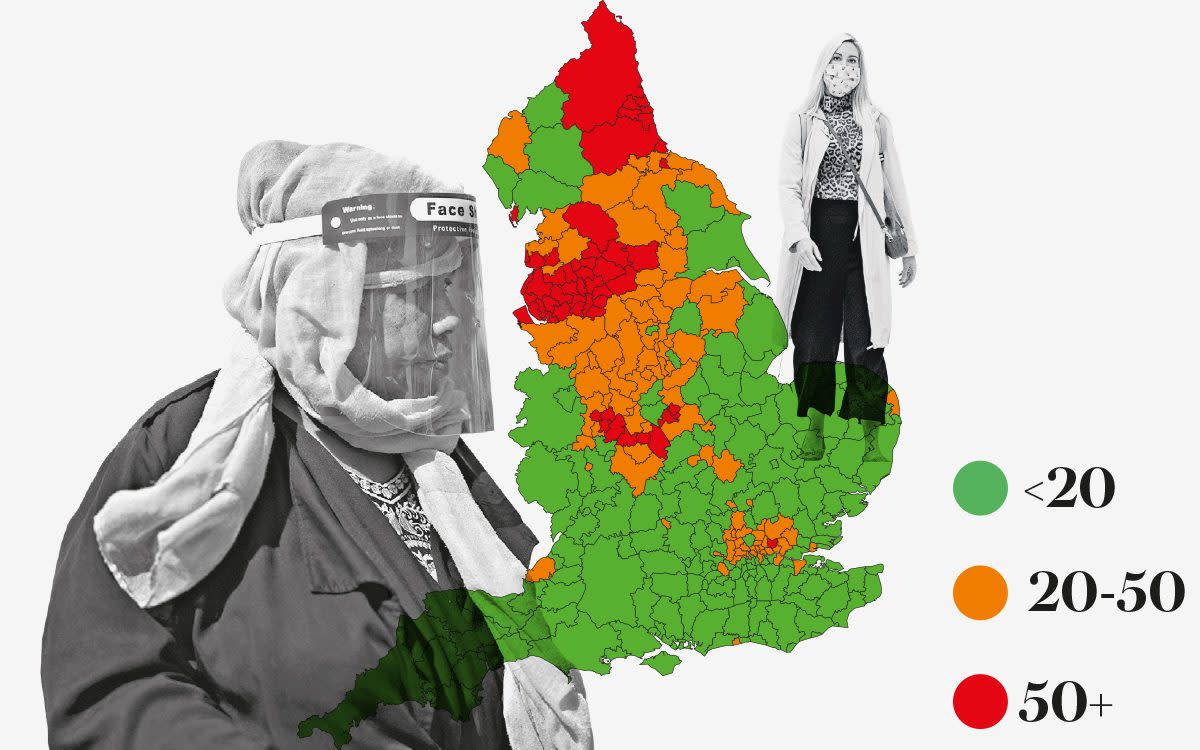 Local lockdowns are set to be automatically triggered by a three-tier “traffic light” system. We can disclose that alerts will be sent to people’s mobile phones under a planned new approach that will divide the country into different areas based on local infection rates that will dictate the severity of local lockdowns. The traffic light system will work alongside the new NHS Test and Trace app, which will include users scanning a QR code to enter and exit pubs, restaurants and bars. Chief Political Correspondent Christopher Hope explains how the traffic light status could look across England if it was in force now. But we can reveal several flaws with the tracing app, which will only function on more modern phones. It provides comedy inspiration for Matt‘s latest cartoon.

It comes as Prime Minister Boris Johnson faces a growing backlash from his own MPs over a decision to bring in new restrictions (explained fully here) that he says will last for six months. At least one minister threatened to resign and up to 50 Tory MPs were said to be ready to withhold support for the Government’s legal extension of its lockdown powers, the subject of a vote in Parliament next week. Associate Editor Camilla Tominey writes in this analysis that after months of over-promising and under-delivering, Number 10 has finally changed tack. Cartoonist Bob also has a striking view of the latest restrictions.

Rishi Sunak will today announce a replacement for furlough as part of a new economic rescue package to get the country through six more months of Covid restrictions. A wage subsidy scheme will top up the pay of people who work at least half of their normal hours, in an attempt to avoid mass redundancies when furlough ends next month. The November Budget has been postponed until next year because of the financial turmoil that saw markets plunge after nationwide social distancing rules were imposed. Political Editor Gordon Rayner explains how the new bail out will be focused on saving jobs – with an extension of business loans expected to be among other measures unveiled.

Lockdown 2: How to power through ‘six-month wall’

In any sustained crisis, the six-month mark is difficult. Britons have now lived through pandemic restrictions for half a year. Yet, just as we seem to have adjusted, many of us feel as though we have suddenly hit a wall. So how can we make it through a prolonged disaster if we are already running out of steam? Aisha Ahmad, an expert on conflict zones, explains how to beat the six-month wall. Rosa Silverman finds six reasons to be cheerful over the next six months. And for a twice-weekly burst of positivity, I can recommend our free Good News newsletter.

At a glance: More coronavirus headlines

Also in the news: Today’s other headlines

Trump ‘not a fan’ of Meghan | Donald Trump has taken a public swipe at Meghan Markle after she and Prince Harry appeared in a US voter registration drive video, saying he was “not a fan” of the Duchess. The US president also appeared to make a joke about the pair’s relationship, saying that Prince Harry was going to need “a lot of luck” in the future. US Editor Ben Riley-Smith reports that the intervention escalates a remarkable spat between the US leader and the young royals, who have stepped back from official duties and moved to America.

Around the world: Back to school in Pakistan

Female students in Peshawar, Pakistan, wear protective masks as they queue to have their temperature checked before entering a class. Under its “smart” lockdown system, the country has started to ease coronavirus restrictions and allowed the reopening of schools for pupils aged 10 to 13. View more striking world pictures in our daily gallery.

Offices U-turn | Britain’s biggest banks, law firms and accountants have cancelled plans to bring thousands of workers back to the office following new advice from ministers, dragging the City back into shutdown and sparking fresh fears for London’s tottering economy. Some of the Square Mile’s biggest businesses said staff should work from home again just weeks after beginning to reopen.

Shock takeover talks | He is better known as a mask-wearing Hollywood actor in the Deadpool films, but Ryan Reynolds’ ambitions could now extend to investing in non-League Wrexham. Reynolds confirmed that he and fellow American actor Rob McElhenney had been in talks with the National League side. James Ducker explains why.

Chicken with plums, honey and spices | A deliciously warming autumn casserole by Diana Henry. Read on for the recipe.

And finally… for this morning’s downtime

When the CIA took LSD | Ken Kesey wrote One Flew Over The Cuckoo’s Nest after taking LSD for a government mind control test. But what, exactly, was MKUltra for? Susannah Goldsbrough examines the twisted experiments that inspired Ratched.