The war in Ukraine could cost insurers billions of dollars in claims, with the aviation insurance sector alone facing potentially the biggest loss event in its history due to the hundreds of planes grounded in Russia.

With tougher western sanctions shutting Russia’s aviation and space sectors out of insurance and reinsurance markets, the expectation is that risks will only grow.

“The ripple effects from this terrible situation will be felt widely,” said Caroline Wagstaff, chief executive at the London Market Group, a trade body for London’s international insurance sector. “Insurance claims — possibly significant across the market — will be made, and the market is working to understand their scope and scale.”

Insurers have sought to cap their exposure to the conflict by refusing any new contracts that could open them up to further Russia losses, rewriting policies to exclude the country from future claims, or demanding eye-watering extra premiums to cover ships passing now treacherous waters.

But for the insured ships, planes, buildings and commodities that have been caught up in the fighting, the damage may already be done.

The global market for specialist insurance, with Lloyd’s of London at its centre, is expected to take a hit. Shares at Lloyd’s underwriters such as Lancashire and Beazley — specialists in exposed areas such as war and political risk — have fallen sharply in recent weeks. Both groups declined to comment for this story.

Big reinsurance groups, which sell cover to insurers seeking to protect themselves, have reported smaller falls, with executives declining to put a number on their expected exposure.

Lloyd’s of London is expecting a significant but manageable overall loss, according to a person familiar with the matter, who estimated the final bill, after reinsurance pays out, could land somewhere in the $1bn-$4bn range.

“It’s really difficult to peg the upper end of [that range] because there are so many different things that need to play out,” said another senior source in the Lloyd’s market.

Lloyd’s, which took a net blow from Covid-related claims of more than $4bn in 2020, declined to comment on its overall exposure but said that Russia and Ukraine account for less than 1 per cent of its premiums.

The Bank of England has remained sanguine about the impact of sanctions on the sector but the reality, say insurance executives, is that it is hard to get a sense of stranded and damaged assets in a war zone.

The difficulty of both on-the-ground assessments and using technology such as drones was creating a “paucity of information” for the industry, said Forbes McKenzie, chief executive at London-based McKenzie Intelligence Services.

Images of grounded planes and ships hit in crossfire have meant that the spotlight has turned on marine and aviation insurers, particularly policies known as “war risk” or “contingent” cover that protect owners against damage or seizure of their assets in a conflict.

Marine insurers have moved quickly to limit the financial damage, with the Joint War Committee, an international body, labelling more and more waters around Russia and Ukraine higher risk, meaning an owner has to contact their underwriter if they wish to enter. But claims are still expected, with a handful of vessels already damaged.

The conflict threatened to create the “single largest aviation loss in history” if stranded planes were not recovered, said Garrett Hanrahan, global head of aviation at Marsh, the world’s biggest insurance broker.

Industry estimates are that the near-600 western-built planes in Russia could be worth $13bn. But insurance policies have aggregate limits for how much can be paid out. Marsh estimated that a worst-case scenario where planes could not be recovered would leave the global insurance market with a loss of about $5bn, bigger than it suffered after 9/11.

Such a widespread loss would be a “market-moving event that changes everything”, Hanrahan added, so far outstripping the revenues on offer from this type of insurance that some underwriters might choose to pull back from the sector altogether.

Many expect a legal wrangle over whether the contracts should pay out, with reports that insurers have rushed to cancel some short-term cover.

The crux of the dispute will come down to when cancellation notices were given by insurers and if, for example, they came after sanctions were imposed but before the plane is expropriated.

“It’s our belief that an underwriter can’t issue a notice to reduce or preclude cover on an object of insurance . . . while it is in the grip of an insured peril,” said Hanrahan.

Hiscox, another of the big London market insurers, expects its exposure for potential claims from damage to assets in Ukraine such as buildings could run into the tens of millions of pounds. But the company is heavily reinsured and said any hit to profits would be “very manageable”.

“These policies are designed to respond to this kind of event. It’s why we write [them],” said chief executive Aki Hussain. Axa, meanwhile, has told analysts it has political risk exposure of €130mn to Ukraine, and €180mn within Russia — though half of it is reinsured.

Also falling broadly under the political risk umbrella is credit insurance, which protects against non-payment by debtors, such as a Russian buyer of foreign goods or recipient of bank finance. Wider financial sanctions have thrown many payments into doubt. 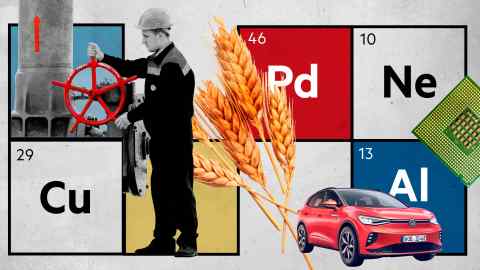 One commodity banker said that while he was not worried about any bank’s lending or trade finance exposures – because they had taken out insurance – he predicted “colossal claims” on the horizon for political risk and credit insurers who would cover his losses.

The political risk and credit sector is already reeling from Covid-related claims and failures of certain commodity traders such as Hin Leong Trading, which collapsed last year owing $4bn to creditors.

While estimating their losses, the fear among insurers and brokers is that sanctions could spread into areas of energy and shipping that are core to the London market. At Lloyd’s, marine, aviation, transport and energy made up 12 per cent of business in 2020. There have been widespread predictions that cyber claims could also surge, but cyber insurance brokers have not reported a noticeable uptick in attacks against companies.

In private, many insurance experts argue that the big claims numbers being bandied about might not materialise once the conflict is over. A lot would depend on “what kind of understanding Russia will come [to] with the rest of the world”, reinsurer Hannover Re board member Sven Althoff told analysts last week.

But if the fighting and claims do spiral, market participants are suggesting government support might be needed.

Marsh’s Hanrahan acted as an insurance broker for American Airlines during the 9/11 tragedy when the US government provided a backstop for the industry and he said there could be a need for the state to step in again.

If losses mount we could, he said, “need to look at the possibility of a public-private solution given that the loss will have been brought about by government action”.

These 2 ‘Sturdy Purchase’ Penny Shares Are on Monitor for Huge Features, Say Analysts