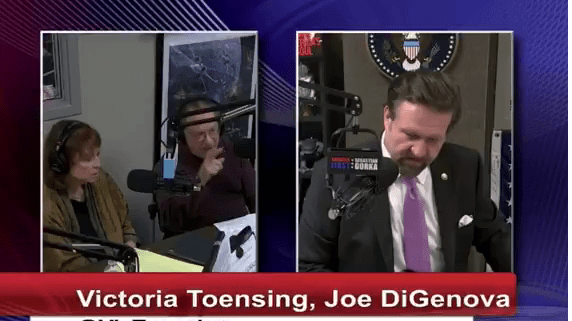 For more than a week now, right-wing media outlets and pro-Trump pundits have railed against Fox News for an on-air segment that featured multiple hosts shutting down Speaker of the House Newt Gingrich just as he began a conspiratorial rant against Soros—who has long been the target of anti-Semitic tropes from the right. After Gingrich asked if the topic was “verboten,” the discussion ended in a long awkward silence.

Amid a growing backlash from conservatives—who felt Gingrich was being silenced from criticizing a right-wing bogeyman—Fox News anchor Harris Faulkner later issued an on-air apology for the segment, describing the former speaker as “beloved” and “needed to be allowed to speak.” Gingrich, meanwhile, authored an op-ed complaining that he was the victim of a “Soros cover-up.”

DiGenova, who has been absent from Fox airwaves for nearly a year after baselessly accusing Soros of controlling the State Department, appeared on former Fox News contributor Sebastian Gorka’s radio program on Wednesday to claim Fox is in the pocket of the liberal billionaire. (Gorka, a one-time Trump assistant, continues to make frequent guest spots on Fox Business Network.)

Banned Fox News guest and right-wing attorney Joe DiGenova and Seb Gorka are going all in, alleging that ”Fox News fears George Soros, ” while further theorizing about what Soros ”has on” Fox CEO Suzanne Scott. pic.twitter.com/gWEI8nHBws

Alongside his wife Victoria Toensing—both have served as attorneys for President Donald Trump—diGenova argued that Faulkner personally owed Gingrich an apology for interrupting his anti-Soros tirade, adding that she “didn’t correct the record” and acknowledge that Soros has funded local district attorney races. (Gingrich alleged that “George Soros-elected, left-wing, anti-police, pro-criminal district attorneys who refuse to keep people locked up” was the main cause of violence at protests.)

At the same time, the Trump-boosting attorney applauded Fox News star Tucker Carlson’s recent anti-Soros monologues, saying the far-right host is “strong enough” to do it while lamenting others will not.

“But there are other nighttime hosts who will not touch Soros,” he concluded. “They’ve been told not to. I don’t know why they won’t do it. It’s unbelievable!”

Fox News came under fire last year from several Jewish organizations after diGenova said on Lou Dobbs’ show that Soros “controls a very large part” of the State Department and has “corrupted FBI officials,” dabbling in the right-wing trope that the Jewish billionaire was a political puppeteer.

Several groups called on Fox to explicitly ban diGenova from its airwaves and issue a public apology, citing the network’s decision to bar a previous guest for similar remarks. While the network never publicly declared that diGenova was no longer welcome, he hasn’t appeared on air since late last year.

Read more at The Daily Beast.

Get our top stories in your inbox every day. Sign up now!

Daily Beast Membership: Beast Inside goes deeper on the stories that matter to you. Learn more.