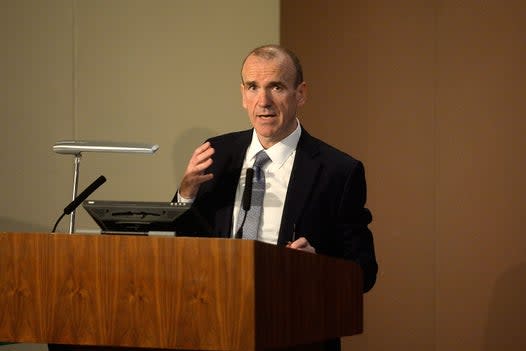 The former boss of Tesco has called on Government to relax planning regulations and abolish business rates to aid a revamp of Britain’s barren High Streets.

Sir Terry Leahy said that, with thousands of jobs being lost in the retail sector after non-food stores were forced to shut in lockdown, the time was right to ditch the much-criticised business tax. Retailers have been given a year’s holiday from rates.

Leahy told the Standard: “The time has now come that the Treasury has to find a solution for the problem. In the past the feeling was that retailers could pay and jobs were being created in that sector, that’s no longer the case, jobs now are being lost in retail.

“They can’t afford to pay the extremely high taxation levels that the combination and corporation tax and business rates mean for a retailer, they’re competing with people who are not paying the same level of taxation and unless it’s addressed it will mean very material job losses in the sector and that wasn’t the case in the past and now government does appreciate it needs to find a solution.”

Speaking over Zoom, Leahy said the Covid crisis had accelerated the shift, notably in non-food retailing, online and town planners needed to act quickly. He said: “The High Street can now start to reshape around a more settled picture in terms of consumer demand. Clearly that will mean there will be less non-food space on high street, but it will in time be replaced by housing, retirement homes, doctors surgeries, gyms, beauty parlours, lots of services, restaurants when people come back… with the right sort of imaginative, visionary planning I think the high street can recover.”

During Leahy’s tenure as Tesco chief, the supermarkets chain pursued an aggressive out-of-town expansion strategy which many claimed was detrimental to high streets.

The Liverpudlian also urged government to loosen planning rules, alluding to Prime Minister Boris Johnson’s infrastructure mantra. He said: “Build, build, build is not a bad slogan for the direction we should try and take for the economy because the starting point is that we have to grow ourselves out of the problem in order to be able to repay the debt, austerity won’t deal with it, taxation won’t deal with it, you have to build the wealth creating base and then you’re in a much better position to meet the fiscal challenge and meet the social and environmental objectives that people have.

“For the whole of the UK, the one thing we can do is slow the growth in product and market regulation. The fastest growth sector in the UK economy in last 20-30 years has been regulation and we need to put that in reverse, it’s the big break in productive growth. You only have to look at land use and planning policies, there’s reams of studies that show that an over regulated planning sector is a huge brake on economic growth.”

“We need a period where we suspend some of these planning rules in order that we can push on and develop the economy and build the infrastructure that we need. In many examples we may not need to suspend the rules, just get the decision more quickly. The problem is the time and the uncertainty in the process as much as the actual hurdles that people have to overcome… Look at London, it’s incredibly difficult to get a garden shed extension in some parts of London but at the same time we’ve missed out on air pollution, it’s incredible, far more important.”

Leahy pressed for UK city and town leaders to be strategic about their planning – identifying which industries could give them long term prosperity – and not wait for Westminster to give them direction.

The son of a Merseyside bookmaker, the retail veteran started his career stacking shelves at the chain he would go on to lead. He climbed the ranks and into the upper echelons of Tesco via the marketing department, and his work on Clubcard is seen as pivotal in its growth at the expense of rivals.

Leahy’s legacy has been frequently reassessed in the decade since his departure as the group descended into crisis – culminating in an accounting scandal – under his successor Philip Clarke. Current chief Dave Lewis righted the ship and leaves in the autumn, succeeded by former Boots executive Ken Murphy.