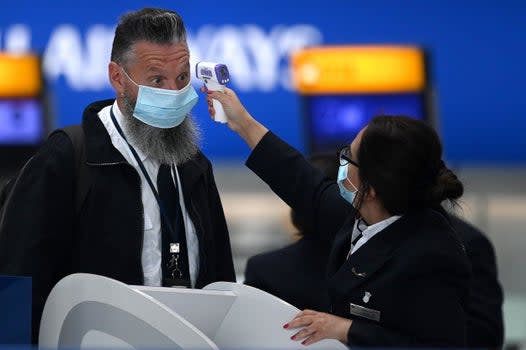 Business leaders today ramped up pressure on the Government to create an air bridge between the UK and US amid fears the lack of a plane route is preventing deals.

Chief executives want ministers to run trials of a coronavirus testing system on long-haul routes from London to New York to reduce the damage from travel restrictions.

Airlines are calling for a system which tests passengers on departure or arrival, and again five days later. If they test negative twice, they would not be required to quarantine for two weeks.

A report today estimates the collapse in air travel between the UK and the world’s largest economy will cost £11 billion this year. The Airlines UK report, commissioned by Heathrow airport and British Airways owner IAG, claims £3.5 billion could be lost from a lack of US tourists and business travellers alone.

Advertising tycoon Sir Martin Sorrell, who runs S4 Capital, said an air bridge with New York is a “good idea”, and Los Angeles and San Francisco should also be included. He said: “It would be very useful, particularly for bankers with so much M&A and IPOs taking place.

“I think people will understand that business needs to carry on and business people need to travel.” Sorrell said smaller deals could be agree over video calls. “But for the big deals with so much at stake I think you have to meet and look people in the eye,” he said.

Simon Carter, incoming chief executive of London offices giant British Land, said: “This makes a lot of sense and feels like the right time to me. Anything that starts the flow of international travel between big cities and London has to be done.

“London has always benefited from tourists and business workers — it’s really important to help our theatres, shops and hospitality industries.”

Travelsafe Systems, which has developed a rapid Covid testing system, won praise from former Prime Minister Theresa May as she urged testing on arrival earlier this month.

Travelsafe’s chief executive Nicholas Lambe said: “We have potential customers in airports on both sides of the Atlantic who are wanting to open up safe tested air travel by testing on departure and if necessary again on arrival.

“This is a major frustration to many leaders both inside the air transport sector and in business in general as all it would take is agreement from the governments to recognise test results as a way to avoid quarantine.”

Ed Lascelles of tech investor AlbionVC added: “London is one of the top three tech hubs in the world but if we can’t easily fly to New York or California, then that position is threatened.”

Alex Stewart, who runs London based luggage brand OneNine5, says: “Until we can travel to New York, we’re unable to expand our direct-to-consumer start-up to the US. We can’t open a US bank account remotely and need to be there in-person.

“We really hope the government will consider an air bridge soon to kickstart our recovery after a year of stifled growth and uncertainty.”

Sadie Restorick, chief executive of training specialist We Work Well, said: “The restrictions have had a huge impact, with 70% of our business coming to a standstill or being lost to more local providers.

“This transatlantic bridge will enable us to reconnect with our clients and establish new partnerships within this area. Providing the right safety protocols and testing measures are put in place, this move will be a huge boost to our business.”

Michael McFadgen, partner at fintech investor Element Ventures, said: “It is logical that the opening of an air bridge will facilitate increased innovation and capital flow, as well as significant commercial opportunities on either side of the Atlantic.”

Heathrow has set up a testing facility capable of conducting 13,000 tests a day and insists that the system would not use the same laboratories as the NHS, easing worries the UK’s stretched testing regime could be overloaded.

The Department for Transport has reportedly discussed the plan with its American counterpart but signs of a second wave of Covid have dampened talks.

Bosses also noted that New York had been particularly hard hit by the virus.

Superdry is just too cool for the stock market, it should go private