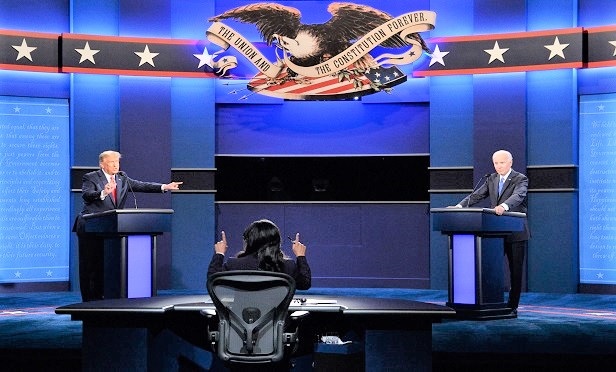 Biden, the Democratic nominee, said any suggestions that he wants to eliminate commercial health insurance, and to move to the kind of government-run single-payer health finance system proposed by Sen. Bernie Sanders, are incorrect.

“The reason why I had such a fight with 20 candidates for the nomination was that I support private insurance,” Biden said.

Trump and Biden talked about health policy in Nashville, Tennessee, at the second 2020 presidential debate.

Biden also talked about his support for keeping commercial health insurance around Sept. 29, during the first debate.

Trump said the country needs to make sure that the 180 million people who have employer-sponsored health coverage keep their plans.

“These are people that love their health care,” Trump said.

Trump said that his administration has already terminated the Affordable Care Act individual mandate — the provision that required many people to have a minimum level of health coverage or else pay a penalty.

“That is the worst part of Obamacare,” Trump said. “The individual mandate, where you have to pay a fortune for the privilege of not having to pay for bad health insurance. I terminated it. It’s gone. Now, it’s in court, because Obamacare is no good. But then I made a decision, run it as well as you can… I could have gone the other route and made everybody very unhappy.”

At this point, Trump said, premiums are down.

But “here’s the problem,” Trump said. “No matter how well you run it, it’s no good. What we’d like to do is terminate it…. But, it no longer is Obamacare, because, without the individual mandate, it’s much different.”

When Biden talked about health policy, he emphasized that his public option proposal would create a government-run alternative to private insurance for low-income people.

The public option plan would provide competition for the private plans, Biden said.

“How many of you at home are worried and rolling around in bed at night, wondering what in God’s name you’re going to do if you get sick, because you’ve lost your health insurance and your company’s gone under?” Biden asked. “We have to provide health insurance for people at an affordable rate.”

Biden also criticized Trump’s assertion that it would be simple to protect the ability of people with health problems to get affordable coverage while getting rid of the ACA.

America’s Health Insurance Plans, a group for health insurers, held an online event Thursday that was aimed at reporters from consumer-oriented publications.

One of the main point AHIP and the speakers tried to make is that uninsured consumers should ignore what they’re hearing about the Affordable Care Act from the news.

Steve Lopez, director of UnidosUS, a group with a strong interest in health policy, said he heard of a family that had to be talked into applying for coverage through an ACA public exchange, because the family thought that the ACA had already been repealed.

But, for uninsured consumers, “it’s really important to isolate yourself from the news,” Thornton said.

No matter the courts and candidates are saying, “In terms of your actions for open enrollment, I don’t think it matters,” Thornton said.

— Read Biden and Trump Agree on Role for Private Health Insurance, on ThinkAdvisor.

Christians Invented Health Insurance. Can They Make Something Better?