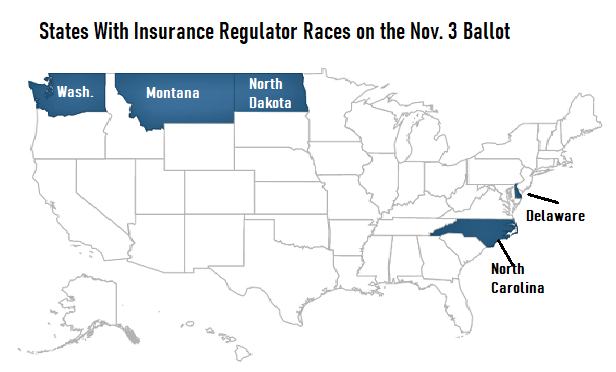 This year, top insurance regulator races are on the statewide ballots in Delaware, Montana, North Carolina, North Dakota and Washington state. Here’s a look at those five races:

Navarro, the current Delaware insurance commissioner, is running as a Democrat.

Pillsbury is running as a Republican.

Navarro first became Delaware’s insurance commissioner in 2016. He says on his campaign website that his achievements include putting Affordable Care Act health coverage rules into state law and requiring pharmacy benefit managers to file financial information with the insurance department.

Pillsbury says on her campaign website that she is qualified to be the state’s insurance commissioner because she has been a captain in the U.S. Army, a major in the Air Force, and the owner of a pediatric medical practice. She is the chair of the Delaware Medicaid Medical Care Advisory Committee, and she has served on an American Medical Association that develops medical industry billing codes.

Troy Downing is running for the post of state auditor, which includes insurance commissioner and securities regulator duties, as a Republican.

Shane Morigeau is running as a Democrat.

Roger Roots is running as a Libertarian.

The current officeholder, Matt Rosendale, is not in the race because he’s running against Kathleen Williams for a U.S. House seat.

Downing says on his campaign website that he served for eight years in the U.S. Air Force and Air National Guard, as part of a combat search and rescue squadron that was deployed in Afghanistan. He says that he now owns a distillery and has also built a nationwide commercial insurance company. He says he would support the Second Amendment and public access to lands for recreational purposes. He says he would oppose unnecessary and unreasonable regulations.

Morigeau says on his campaign website that he is a member of the Salish and Kootenai tribes, and began his career as an attorney representing the Confederated Salish and Kootenai Tribes. In that capacity, he says he helped persuade Montana to participate in the Affordable Care Act Medicaid expansion program, which now provides health coverage for about 10% of Montana residents.

He serves in the Montana House as the minority whip. If he becomes commissioner, he says he will work to hold insurance companies accountable, protect consumers from investment fraud, and ensure that health insurance rates are fair and affordable.

Roots has run for several different statewide offices. A current campaign website could not be found. He has said on his Facebook page that he supports the rights of the individual and opposes the ACA provision that requires many people to have health coverage or else pay a penalty.

Causey, the current insurance commissioner and state fire marshal, is running as a Republican.

Goodwin is running as a Democrat

Causey is an insurance agent and agency owner. He says on his campaign website that he supports cutting red tape, speeding up the claim payment process, and making his own office more accessible to people who have problems. He opposes government mandates over health insurance and has supported efforts to create association health plans.

Goodwin, a lawyer, was North Carolina’s insurance commission and state fire marshal from 2009 through 2016. He says on his campaign website that he would do more than Causey to hold down insurance rates. He also says he would support getting North Carolina in the ACA Medicaid expansion program and “seeking upgrades to the Affordable Care Act.”

Godfread, the current commissioner, is running as a Republican and is unopposed.

Travisia Martin tried to run as the Democratic candidate, but the North Dakota Republican Party went to court and had the courts declare that Martin did not meet state residency requirements. The state courts refused to let the Democratic Party replace Martin with another candidate.

Godfread says on his campaign website that he has focused on increasing public awareness of and access to his department’s consumer services. He led efforts in North Dakota to create an invisible reinsurance pool, which uses that money to reduce health insurance rates, by protecting insurers against the risk of covering high-cost enrollees.

He also is the chair of the Innovation and Technology Task Force and the Artificial Intelligence Working Group at the National Association of Insurance Commissioners. And is a member of the federal Air Ambulance and Patient Billing Advisory Committee.

Kreidler, the current insurance commissioner, is running as a Democrat.

Patel is running as a Republican.

Kreidler has been his state’s insurance commissioner since 2000 and has been active at the National Association of Insurance Commissioner. He has been a strong supporter of the ACA.

He says on his campaign website that his accomplishments include fighting efforts by out-of-state insurers to take away consumer legal protections, requiring that contraceptives be included in prescription drug coverage, increasing oversight over individual health coverage, and strengthening the state law that regulates billing for out-of-network emergency care, and for out-of-network providers who treat patients who are getting care in in-network facilities.

A current campaign website for Patel could not be found. He says in his official candidate statement that he would try to run the Washington state Office of the Insurance Commissioner like Ronald Reagan’s administration externally and like Thomas Jefferson’s administration internally. He says that, if elected, he would ask Kreidler to be the external insurance commissioner for 20% of the time and have 168 insurance agents fill the role of internal insurance commissioner in one-hour increments, to counterbalance and stabilize the ACA.

Correction: The regulator Wayne Goodwin says he would outdo with respect to rate regulation was identified incorrectly in an earlier version of this article. The regulator Goodwin cited is Mike Causey.

Biden Echoes Obama: ‘If You Have Private Insurance, You Want to Keep it, You Can Keep It’

Avoid this double threat to your car insurance premium!